Dodgers' Kershaw on IL with low back pain; Taylor activated 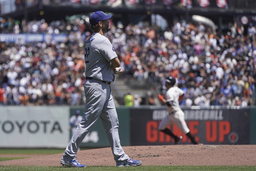 LOS ANGELES (AP) The Los Angeles Dodgers placed left-hander Clayton Kershaw on the 15-day injured list Friday, one day after he left a start with lower back pain.

This marks the 34-year-old Kershaw's second trip to the injured list this season. He was previously sidelined with inflammation in a pelvic joint.

Kershaw had an X-ray and an MRI on Friday, and nothing new was revealed in the MRI. Manager Dave Roberts said Kershaw was sore on Friday, and that prompted to the IL move.

"There wasn't any new findings, so that's a positive," Roberts said. "This was the best-case scenario coming from the MRI."

Kershaw's previous back injury was on the right side, and this one is more on the left side, according to Roberts.

The three-time NL Cy Young Award winner was warming up before the fifth inning of a 5-3 victory over San Francisco on Thursday when he winced and pointed to the Dodgers' dugout. He later walked off the field with a trainer.

Also Friday, the Dodgers activated utilityman Chris Taylor, who missed a month with a fractured left foot. He's batting .238 with six homers and 27 RBIs in 74 games.

The Dodgers will need to fill Kershaw's spot in the rotation in the near future. Dustin May, who had Tommy John surgery last year, is trending toward a return soon. May has another rehab start Tuesday in Triple-A Oklahoma City.

"The world will look different then," Roberts said. "Then we'll make a decision on whether he should make another one, which is most likely, so now you're looking at somebody in our system to make that (next start). (Ryan) Pepiot certainly makes sense."