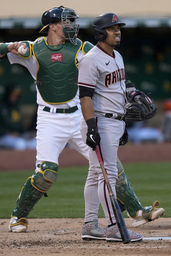 PHOENIX (AP) Exasperated by a run of brutal baseball, the Arizona Diamondbacks shook up their coaching staff in an effort to stabilize their season.

D-backs manager Torey Lovullo fired hitting coach Darnell Coles and assistant hitting coach Eric Hinske on Thursday with the team struggling to score runs and mired in a 5-30 stretch dating back to May 4.

"I'm not pinning it on one person or one group because we're all in this together," Lovullo said. "But we've seen 40 days of the type of offensive production that wasn't meeting our standards and obviously well below average. We've seen that trend before and I felt like I needed to address that trend."

Arizona started the season 15-13 but now has a majors-worst 20-43 record. The D-backs have lost a franchise-record 19 straight road games.

Arizona GM Mike Hazen said he still believes Lovullo is the right person to lead the team. The 55-year-old - who led the Diamondbacks to the playoffs in 2017 - is in his fifth season as manager, though he's in the final year of a two-year contract extension he signed in 2019.

"Ultimately, he and I are going to be judged the exact same way, the wins and losses," Hazen said. "They're not in the position they need to be in right now. No matter what you thought of our season starting off and where you had us pegged, nobody had us pegged at this.

"That's the part we're all grinding through right now."

The franchise has dealt with numerous injuries this season, but even after several key players returned, the losing continued.

The D-backs had two hits in a 4-0 loss to Oakland on Wednesday. They are batting .231 as a team and scored just 12 runs over their most recent six-game trip.

"I wanted to let those injured players return and see if those healthy players getting back into the fold would help this thing turn around," Lovullo said. "But obviously that hasn't happened. That's what led me to this decision today."

Though the team's hitting has been bad, the pitching has arguably been worse. Arizona came into Thursday with a majors-worst 4.97 ERA.

The pitching staff has had even more injuries than the lineup. Four of the team's five starting pitchers - Madison Bumgarner, Luke Weaver, Zac Gallen and Taylor Widener - are currently on the injured list.

Lovullo said questions about his job security were fair considering the team's performance. The Diamondbacks also had a rough 2020, finishing with the abbreviated season at 25-35.

"Me personally - I hurt, I bleed, just like everyone else when we lose games," Lovullo said. "I'm carrying the workload and feelings of 26 players and 15-plus staff members, so that's what I signed up for, these tough days."

The Diamondbacks were off Thursday and open a three-game home series against the Los Angeles Angels on Friday.