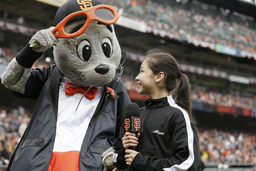 SAN FRANCISCO (AP) None of the Tampa Bay Rays wanted to see their old pal Evan Longoria in the batter's box with the game on the line in the ninth inning and two outs.

This time, Longoria flied out to end the game facing his former team for the first time since being traded in December 2017.

The Rays (6-2) got four straight two-out hits in the first against Dereck Rodriguez (1-1). Given a 4-0 cushion, Tyler Glasnow (2-0) pitched six scoreless innings, allowing three hits and striking out six.

Rays reliever Adam Kolarek hit Brandon Crawford to load the bases with none out in the eighth. Diego Castillo came in one out later and got Giants newcomer Kevin Pillar to ground into a double play. Jose Alvarado finished for his third save, getting Longoria with two runners on.

"I love Longo, but I was hoping it wasn't a storybook," Kiermaier said. "The stars always align in certain situations, of course he had a chance to be the hero."

Ji-Man Choi and Brandon Lowe each doubled in the first, then Diaz and Kiermaier connected.

Rain had been in the forecast for the entire day but the weather cooperated. The tarp came on and off a couple of times before first pitch at Oracle Park, where a new scoreboard provided a highlight on a day the Giants' bats did not.

Tampa Bay hit the road for the first time to start a nine-game trip and the Rays won their sixth in seven games. This is just their second trip to play the Giants in franchise history and first since 2002, ending the club's longest stretch not visiting a road ballpark.

Pillar played his second home opener after a March 28 game with Toronto against the Tigers before being acquired by San Francisco on Tuesday. Pillar singled in the seventh and came home on pinch-hitter Pablo Sandoval's double. Steven Duggar followed with a double.

Giants manager Bruce Bochy tipped his cap every direction during a roaring standing ovation of nearly 90 seconds from the sellout crowd during pregame introductions and also threw out the ceremonial first pitch - the first time in his career he's done so.

"It's really emotional. It's overwhelming what happened there. It's something I'll never forget," Bochy said. "So I thank them. It was a really special moment."

Not that he's thinking about that right now, most concerned with making the Giants a contender again before he moves on. Yet Bochy said opening day "never gets old."

"I try not to get caught into that," Bochy said of his future. "Just like I tell our players, `let's keep our focus here on what we need to do.'"

The Giants paid tribute with a moment of silence to late Hall of Famer Willie McCovey, who died Oct. 31, as well as former manager Frank Robinson, managing general partner Peter Magowan and former broadcaster Hank Greenwald. Broadcaster Mike Krukow read a speech prepared by Magowan before he died in January. He would have been 77 on Friday.

A video tribute to McCovey was shown shortly before first pitch.

Also remembered were victims of the deadly Northern California wildfires, while first responders for the devastating fires were saluted for their service.

Rays: Diaz returned to the lineup after sitting out Wednesday's home loss to Colorado with a left ankle injury.

Rays: RHP Ryne Stanek will start as the Rays opener it was announced afterward.

"Until we know, we'll be ready for different scenarios," Bochy said. "I've already told some guys, `Hey, the order may be a little bit different with what's going on here the next two days.'"

Giants: RHP Jeff Samardzija (0-0, 0.00 ERA) makes his second start of the season and first at home after a no-decision March 31 at San Diego.