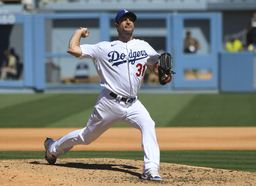 While deadline trades can flop or flourish, it's safe to say the Los Angeles Dodgers' July 30 deal with the Washington Nationals has worked out brilliantly for the reigning World Series champions.

Los Angeles got pitcher Max Scherzer and second baseman Trea Turner from the Nationals in exchange for four young players. Turner has hit .307 with four home runs and 28 runs scored in 42 games with the Dodgers while Scherzer is 7-0 with a 0.78 ERA in nine starts with his new team.

Scherzer will go for his 12th consecutive winning decision overall when Los Angeles plays the rubber game of a three-game series against the Colorado Rockies on Thursday in Denver. The Rockies will counter with lefty Kyle Freeland (6-8, 4.50 ERA).

Colorado bounced back from losing 5-4 in 10 innings Monday to win 10-5 Tuesday.

The Dodgers (97-55), who have won nine of their past 11 contests, trail the first-place San Francisco Giants (99-53) by two games in the National League West entering the series finale. The Rockies (71-80) have won eight of their past 11.

Scherzer has accomplished plenty in a career that began with the Arizona Diamondbacks in 2008. He has won three Cy Young Awards and pitched in two World Series, winning it all with Washington in 2019.

Scherzer (15-4, 2.08 ERA overall) has strengthened an already impressive Los Angeles rotation with his arrival. He has impressed Rockies manager Bud Black, who has seen the righty since his early days with the Diamondbacks.

"Over time he's refined his skills, he's polished his game, he's truly worked on his strengths," Black said. "He's improved his weaknesses. He's a complete pitcher. He can get you out with multiple pitches that he has confidence in. The changeup is probably the pitch that's come the farthest, and now it's a true weapon for him along with his fastball."

As well as he has pitched in his career, Scherzer has not fared as well against Colorado. In 10 career starts vs. the Rockies, he has gone 2-4 with a 4.55 ERA, including an 0-3 mark with a 5.88 ERA in five starts at Coors Field. He has not pitched against them since July 25, 2019, when he allowed three runs over five innings for the Nationals.

Freeland has been up and down this season, but he is coming off a strong start. He pitched six scoreless innings in a 6-0 win at Washington on Saturday. The fifth-year Rockies pitcher has started to figure things out, especially when it comes to pitching in Denver and then at sea level.

"I think a lot of that comes with experience, being in the league for some time and learning a lot and truly learning about your arsenal," Freeland said after the win over the Nationals. "The two-seamer, at sea level, is something that I can lean pretty hard on, just because I know it's going to be catching that thick air and have quality movement to it."

Freeland is 3-7 with a 4.06 ERA in 15 career starts against Los Angeles. In three starts against the Dodgers this season, he is 2-1 with a 2.84 ERA, having tossed at least six innings in all three outings.