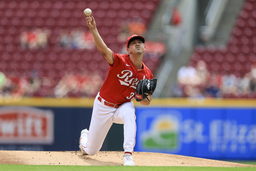 Mahle (5-7, 4.40 ERA), who hasn't faced the Blue Jays in his career, was part of a key deadline trade with the Cincinnati Reds.

Minnesota dealt three of its top 25 prospects -- infielders Spencer Steen and Christian Encarnacion-Strand and left-hander Steve Hajjar -- to obtain him.

In his last appearance for the Reds, Mahle earned a 8-2 victory over the Baltimore Orioles on Saturday after allowing two runs on five hits and no walks in six innings. He struck out seven. Mahle has pitched to a 2.83 ERA over his past nine starts, working at least six innings in eight of those outings.

Mahle, 27, arrived in Minnesota on Wednesday and threw a bullpen session. He is reunited in the Twins' rotation with Sonny Gray, who was his teammate for three seasons in Cincinnati.

"As soon as I landed, I kind of felt like this was where I needed to be," Mahle said before the Blue Jays won the series opener 9-3 on Thursday. "I texted my wife and everything. I was like, 'I think you are going to like it here.' We're excited."

The Twins are glad to have him considering they are 3-6 in their past nine games. Minnesota is clinging to a one-game lead in the division over the Cleveland Guardians and a two-game edge on the defending Central champion Chicago White Sox.

"I think (Mahle is) a guy that we know has the stuff and ability to pitch toward the top of the rotation," said Derek Falvey, Minnesota's president of baseball operations. "And hopefully, he's doing that amongst a whole group of his peers over the next couple of seasons for us."

Mahle went 20-15 over the past three seasons with the Reds, and he is averaging 9.83 strikeouts per nine innings this season.

Right-hander Jose Berrios (8-4, 4.96), obtained by the Blue Jays from Minnesota in a 2021 deadline deal, will make his fourth career start against the Twins on Friday. He is 2-1 with a 3.66 ERA against them.

Berrios picked up the win in a June 4 start against the Twins in Toronto when he allowed two runs on three hits over seven innings while setting a career high with 13 strikeouts. He subsequently fanned 13 Philadelphia Phillies on July 12.

The Blue Jays, despite being no-hit over the first 4 2/3 innings by Gray on Thursday, still managed to take the series opener by rolling up nine runs on 12 hits against the Twins' bullpen.

Vladimir Guerrero Jr. led the way with a double and three-run homer. Bo Bichette added two doubles and a single for Toronto, which blew the game open with a six-run eighth inning. Teoscar Hernandez also homered for the Blue Jays, who hold the first AL wild-card spot.

"If you can line it up, they all have the potential for damage," Toronto interim manager John Schneider said. "If you can put guys on base and put the ball in play like we've been preaching all year -- I know we had six walks, five in the first five innings. Nothing came of it, but when you put that combination of on-base and damage together, it's pretty good."

It was the fourth win in five games for Toronto, which improved to 9-3 since the All-Star break.