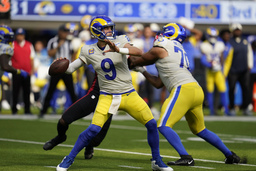 GLENDALE, Ariz. (AP) There aren't many secrets between the Arizona Cardinals and Los Angeles Rams, teams that will face each other Sunday for the fourth time in the past calendar year.

There's also no secret the Rams have had a huge advantage of late.

The defending Super Bowl champions have won 10 of 11 games in the series dating to 2017, including a dominant 34-11 playoff victory in the NFC wild-card round.

"They've obviously had our number here for a long time and that's not lost upon us, but we're just trying to improve," Cardinals coach Kliff Kingsbury said. "The last two weeks, we have started so slow, and we had 12 penalties last week. There's a lot that we have to focus on.

"We know they're a talented team and defending champs, so it's really been about us improving this week."

The Cardinals (1-1) are in a good mood after last week's stunning come-from-behind win. Arizona trailed Las Vegas 20-0 at halftime, but rallied for a 29-23 victory when Byron Murphy Jr. returned Hunter Renfrow's fumble 59 yards for a touchdown with 3:51 left in overtime.

The Cardinals did beat the Rams once last season, 37-20 in Inglewood.

Cardinals quarterback Kyler Murray said facing the Rams - including seven-time All-Pro defensive lineman Aaron Donald - is something he enjoys, no matter how difficult it can be.

"I've learned to embrace and love the opportunity to be able to play against (Donald) just because he's not going to be here forever and playing the game forever," Murray said. "To be able to step on the field with him is an honor and to be able to go to battle against him. Like I said, he's one of the best ever do it, so that's how I see it."

It has been a conundrum since Murray was drafted No. 1 overall by the Cardinals in 2019: The shifty quarterback is at his best when he runs the ball, but that also increases his risk of injury.

Kingsbury said Murray did a good job of picking his spots against the Raiders. The fourth-year quarterback made multiple incredible plays during Arizona's comeback against Las Vegas, including a 20-second scramble for a crucial 2-point conversion.

"He took advantage of the opportunities when they were there," Kingsbury said. "I thought he made really good decisions of when to take off and when to move around."

Arizona's defense doesn't have an interception yet this season, but Stafford has been generous with the Rams' last few opponents.

The veteran quarterback leads the NFL with five interceptions in the first two weeks, and he tied for the league lead last season with 17 in his first year in LA. Stafford has thrown eight interceptions in his last four games, counting the Rams' final two postseason victories.

Stafford has vowed to cut down on his turnovers, which have happened even with coach Sean McVay largely avoiding long downfield routes in one of the NFL's most cautious passing attacks.

Cardinals linebacker Isaiah Simmons lost his starting job after one week but had the team's biggest moment in Week 2, forcing Renfrow's fumble that was returned by Murphy for the overtime touchdown.

Simmons - a first-round pick out of Clemson in 2020 - has been an enigma for the Cardinals during his first three seasons and it's hard to know where he goes from here. He was on the field for just 15 snaps against the Raiders because of his inconsistency, but has a penchant for big plays.

The Rams' defense has compensated for Stafford's profligacy by making seven takeaways in the first two weeks of the season, tied with Buffalo for the most in the league. The defense only made 25 total takeaways last season.

Seven players have a takeaway, including All-Pro defensive back Jalen Ramsey's game-clinching interception against Atlanta last week. The Rams might need Ramsey to be a difference-maker again this week, since promising rookie defensive back Cobie Durant is unlikely to play due to a hamstring injury and starter David Long could be slowed by a groin injury.

Defensive lineman J.J. Watt is relatively healthy and should play Sunday, which is good news for the Cardinals.

Watt had a sack last week against the Raiders and the five-time All-Pro continues to be effective when he's on the field. He's one reason the Cardinals didn't give up a touchdown after halftime in last week's win over the Raiders.