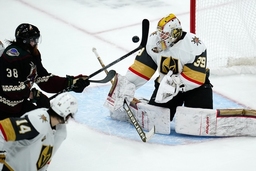 Jonathan Marchessault, Michael Amadio, Evgenii Dadonov and Nicholas Roy also scored and Laurent Brossoit had 29 saves for Vegas, which snapped a two-game skid. The Golden Knights have won 15 of the 21 meetings with the Coyotes since joining the league in 2017.

Pacioretty has three goals and three assists in four games since returning after missing 17 games with a broken foot in the second game of the season.

Travis Boyd scored for Arizona and Karel Vejmelka had 25 saves.

The Golden Knights scored four goals in just under eight minutes of the second period to break the game open.

"We needed a win," Vegas coach Pete DeBoer said. "You look at the standings and you lose a couple in a row and all of a sudden there are teams climbing over you. It should give us some confidence. We haven't scored that many goals in awhile."

Stephenson's goal on a 2-on-1 break gave the Golden Knights a 3-1 lead at 7:17 of the second period and Pacioretty scored his second on a breakaway 55 seconds later - 8 seconds after coming out of the penalty box following a roughing minor.

Five of the Golden Knights' goals came on odd-man rushes, including Pacioretty's breakaway, as Vegas tied a season high with seven goals.

"We recovered a lot of pucks and got a lot to scoring chances off of that," Marchessault said. "That's what created our momentum. Overall, it was one of good games of the year."

Marchessault scored his 10th goal at 6:58 of the first period, skating in alone after a pass from Roy on a 2-1 break out of the Coyotes' defensive zone.

Boyd tied it less than a minute later before Pacioretty's power play goal gave the Knights a 2-1 lead at with 6:07 left in the opening period.

"We want to win that special teams battle every night," DeBoer said. "You put guys like (Pacioretty) that with the puck on their stick and a little bit of room ... He's one guy that doesn't need a lot of opportunity. I don't think it's an accident that our play gets better when you get those guys back in the lineup."

Arizona had won three of their last six games since Nov. 20 after winning two of their first 17.

"It's disappointing," Coyotes coach Andre Tourigny said. "Losing is one thing, but the way we did is a little bit of a setback for sure."

Boyd had his 50th career point on his first-period goal. ... Clayton Keller, who assisted on Boyd's goal, has 10 points in his last eight games. ... Vegas won six of eight in the season series a year ago, both Coyotes wins coming in Arizona. ... The Coyotes recalled Hudson Fasching from AHL Tucson on Friday. ... The Golden Knights are 68-29-4 since DeBoer took over as coach on Jan.15, 2020. ... Brossoit lost the blade on right skate four minutes into the third period while stretching to make a save, and play was stopped while his skate was refitted with a new one. ... Linesman Jonny Murray left the game with a lower body injury midway through the third period and did not return.

Coyotes: At Dallas on Monday.