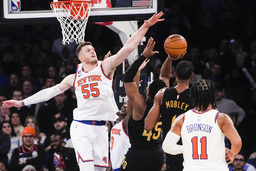 NEW YORK (AP) Donovan Mitchell felt good enough to play again, just not good enough at the end to win it for the Cleveland Cavaliers.

Mitchell returned from a three-game absence with a strained left groin, but he was hurting again as the game finished with the New York Knicks beating the Cavaliers 105-103 on Tuesday night.

Mitchell drove into the lane to attempt the tying shot, but fell short after both his legs cramped and his groin tightened up again.

The star guard said after the game his groin felt the way it did when he had to sit out three games last week.

"Same as before, so I don't know what comes next," he said.

Mitchell finished with 24 points, eight rebounds, eight assists and four steals. But it seemed clear he didn't have his usual lift, getting consecutive shots blocked down the stretch before being unable to score on his final drive when Knicks center Isaiah Hartenstein got in front of him at the rim.

"I felt it a little bit, but nothing to the extent of at the end of the game, and we'll figure it out and see what happens," Mitchell said. "But it's tough when both legs cramp and then you have the groin at the same time."

The Cavaliers were down three with 1:18 remaining when Mitchell's driving shot was blocked by RJ Barrett. Hartenstein blocked Mitchell's short shot on his next attempt with 47 seconds to play.

Mitchell thought he was fouled on one of the late plays, but took the blame for the Cavs not being able to pull it out.

"That's on me, I let the team down at the end of the game," Mitchell said. "We played a really good game up to that point, all of us, and I didn't do my job and that's on me."

He remained on the court a couple minutes after the buzzer sounded, his legs too painful to get up.

"I'm just upset that I felt good enough to come back and for that to be the last five seconds of the game really (ticks) me off," Mitchell said.