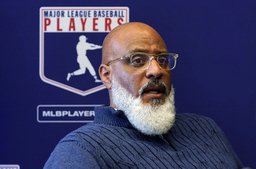 The 50-year-old Clark - who had a 15-year big league career, mostly with the Tigers and Diamondbacks - helped broker the players' current labor deal with MLB. After several contentious months of negotiations, the MLBPA and MLB agreed to the new deal in March, which saved a full 162-game season.

The five-year extension means Clark is in position to lead the players through their next deal, too. The current contract is set to expire after the 2026 season.

Clark has had a busy last few years, helping guide the players through the COVID-19-shortened 2020 season. He also helped the union add thousands of more players after the minor leagues voted to join the MLBPA earlier this year.

The Athletic first reported the news of Clark's extension.