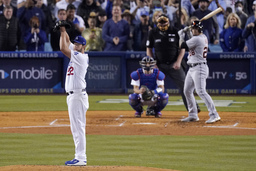 The Dodgers made the move several hours before Kershaw (4-0, 1.80 ERA) was slated to face the Philadelphia Phillies at Dodger Stadium. Walker Buehler started instead.

Dodgers manager Dave Roberts said Kershaw's back "locked up on him" during their flight home from Pittsburgh on Wednesday. Kershaw said he had an epidural pain-relieving injection, but he won't play catch for at least a few days.

"I do believe it will be a brief stint on the IL," Roberts said. "Just looking at previous years of this, going through this similar situation, getting an epidural, and how his body responds to it."

The 34-year-old Kershaw is off to an outstanding start to his 15th season with the Dodgers. The three-time NL Cy Young winner has 32 strikeouts and just three walks in his five starts since signing a $17 million, one-year deal in March to return to his only professional club.

Kershaw became the Dodgers' franchise leader in strikeouts on April 30, but he has spent time on the injured list in each of the past seven seasons. Along with the back pain that has flared up intermittently for years, he was bothered by left arm pain for the entire second half of last season, and he missed the Dodgers' playoff run.

"He came back here to give us a chance to win the World Series this year," Roberts said. "So there's going to have to be some managing of workload. With his experiences and intelligence, he knows when to push and when not to push, and now is not that time."

Buehler (4-1, 1.96 ERA) pitched Friday on normal rest because the Dodgers had an off day since his last start. He is also off to an outstanding start to the season with 32 strikeouts and a 1.06 WHIP.

Roberts said Julio Urias will move up to start Saturday against Philadelphia. After that, the Dodgers' starting pitching situation gets dicey: Beginning Friday, Los Angeles has seven home games in six days, including a doubleheader Tuesday.

"With Walker moving up in the rotation, with Julio moving up, just figuring out who's going to supplant Clayton, we don't know that right now," Roberts said.

Price is likely to return next week at home against Arizona, but the former Cy Young winner won't be ready to throw more than two innings. The Dodgers have two potential candidates for a spot start on their 40-man roster: right-hander Andre Jackson, whose only big league action came in three relief appearances last year, and right-hander Michael Grove, who has never pitched above Double-A.

Cleavinger is returning for his third stint with the Dodgers after allowing one earned run over 1 2/3 innings in his previous three appearances for Los Angeles this season. The Dodgers acquired him from Philadelphia in a three-team trade in December 2020.