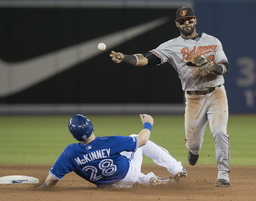 FILE - In this Wednesday, Sept. 25, 2019, file photo, Baltimore Orioles shortstop Jonathan Villar gets the force out on Toronto Blue Jays' Billy McKinney during the seventh inning of a baseball game, in Toronto. Villar was acquired Monday, Dec. 2, 2019, by the Miami Marlins from the Baltimore Orioles in exchange for minor league left-handed pitcher Easton Lucas. (Fred Thornhill/The Canadian Press via AP, File)

MIAMI (AP) The perennially thrifty Miami Marlins opened their purse strings Monday and added some speed and power to an offense that ranked last in the National League in runs and homers this year.

He made $4,825,000 and could command $10 million in 2020, his final year of arbitration. The Orioles parted with Villar for financial reasons.

"He was a tremendously exciting player for us," Baltimore general manager Mike Elias said. "He was a joy to have. He's a fun player, a switch-hitter, he runs, plays hard, he's a great guy. It was hard to let him go."

Aguilar will make $2.5 million in 2020. He's expected to share time at first with Garrett Cooper, who had 15 homers and 50 RBIs for Miami this year.

To make room on Miami's 40-man roster, infielder JT Riddle and right-handed pitcher Tayron Guerrero were designated for assignment. Riddle was not offered a contract and became a free agent.

Guerrero agreed to a $580,000, one-year deal before he was designated.