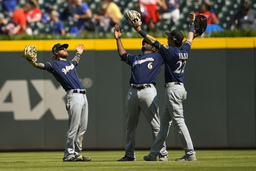 ATLANTA (AP) The longest start of Brandon Woodruff's career felt like a win to him, even though he wasn't involved in the decision.

Woodruff allowed only two runs in eight innings and Ben Gamel homered leading off the 10th to lift the Milwaukee Brewers over the Atlanta Braves 3-2 on Sunday.

All five runs in the game came on homers.

Woodruff gave up five hits in a sturdy outing. His streak of wins in four straight starts ended, but he was happy to give Milwaukee's bullpen a break by showing he could last eight innings.

"I've been able to get some strikeouts, but my whole goal this year has been to just get deep into the game," Woodruff said.

The right-hander threw 93 pitches and had six strikeouts with no walks.

"He's been really good the last four times out and today he even took it to another level," said Brewers manager Craig Counsell, who was ejected in the fifth. "It was really good. It was a great performance."

Gamel said he was looking for the first pitch he could drive.

Christian Yelich and Keston Hiura also connected for Milwaukee, which avoided a three-game sweep in a matchup of 2018 NL division winners. Hiura's fifth-inning shot was the first of his career.

Freeman has homered in four consecutive games for the first time in his career. His 11th homer was the 200th of his career and tied the game in the seventh.

"It's special," Freeman said. "It was nice to do it in front of the home fans, and to get a nice ovation was special."

Mike Foltynewicz, who entered with an 8.02 ERA in four starts, allowed only three hits in six innings for Atlanta.

Acuna led off the game with his ninth home run to the second section of the left field seats. Woodruff didn't allow another baserunner to reach second until Freeman's shot in the seventh tied the game at 2.

Freeman hit a game-ending homer off Hader in the 10th inning of a 4-3 win Saturday night. In a ninth-inning rematch Sunday, Freeman flied out to left field.

The Brewers wasted a scoring chance in the ninth.

With one out, Yasmani Grandal singled off Jacob Webb and moved to third when Eric Thames' grounder skipped into center field. Grandal held at third base on Hiura's fly ball to shallow center field. Webb's pitch to Gamel bounced off the brick backstop to catcher Tyler Flowers, who threw out Grandal at third base.

Brewers: 3B Travis Shaw (right wrist strain) is expected to begin a rehab assignment after taking swings with no problem before the game. He was placed on the 10-day injured list Tuesday and is hitting only .163 with four homers through 40 games.

Braves: Foltynewicz was removed after feeling dizzy following his sixth-inning at-bat, a strikeout. He said he didn't eat before the game. He threw 67 pitches, 44 for strikes.

Counsell was ejected by plate umpire Brian O'Nora. The manager came onto the field to argue after umpires huddled and ruled Orlando Arcia's grounder did not hit his foot and was a fair ball. The ball bounced to rookie third baseman Austin Riley, who threw to first for the out. Arcia limped in pain in the batter's box and didn't try to run to first base.

The play couldn't be challenged, but TV replays indicated the ball hit the ground and Arcia's foot.

Counsell argued with O'Nora and third base umpire Jeff Kellogg, the crew chief.

"You guys know, they missed it," Counsell said after the game. "There was just so much indecision, it was frustrating. There was just an incredible amount of indecision for four sets of eyes on the play."

Riley, making his first start at third base, had three strikeouts and was held without a hit to end a four-game hitting streak to start his career. He had eight hits, including two homers, in his first four games.

Brewers: Open a two-game home series against Cincinnati on Tuesday night when LHP Gio Gonzalez (2-0, 1.69 ERA) is the scheduled starter.

Braves: RHP Mike Soroka (4-1, 0.98 ERA) will look to continue his strong start when the Braves begin a four-game series at San Francisco on Monday night.