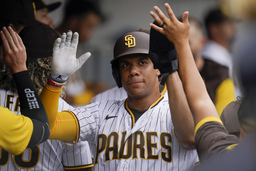 Let's face it: Even with the addition of Juan Soto and Josh Bell and the pending return of Fernando Tatis Jr., the San Diego Padres are unlikely to catch the Los Angeles Dodgers in the National League West this season.

Even if the Dodgers go 28-29 over their last 57 games, the Padres would have to go 39-15 just to pull even, and neither side of the equation is likely.

But it doesn't have to. The "energized" Padres are solidly positioning themselves for a wild-card berth. If San Diego attains that consolation prize, the scenario changes.

Would San Diego's path to the World Series go through Los Angeles? More than likely.

However, a shorter series will determine who keeps advancing in that scenario -- not a 162-game marathon.

"Once you get to the postseason, it's how you stack up in a short series," Dodgers manager Dave Roberts said last year. "Rotation order, hitter-pitcher matchups, who are your best defenders late in a close game ... all that is different from the regular season."

Which is what the San Diego Padres are counting on. Can they beat the Dodgers -- or anyone other playoff team -- in a short series? Which is why what happens the next three days at Dodger Stadium so important.

"Any series against a division rival is important," Padres manager Bob Melvin said. "The later they come, the more important they figure to be ... especially when the postseason is factored in."

Meanwhile, the Dodgers still aren't talking about the Padres in terms of a rivalry.

But let's be honest, a Padres lineup that now includes Soto, Bell and Manny Machado -- and soon will add Tatis -- is formidable. And the Padres have a strong short-series rotation.

This season, the Dodgers have a 5-2 advantage against the Padres, including winning three of four games in Los Angeles.

Manaea will make his 20th start of the season and face the Dodgers for the second time. The first outing did not go well. On April 24 in San Diego, in his fourth start as a Padre, he gave up seven runs (six earned) on six hits and three walks in 4 1/3 innings to take the loss in a 10-2 Dodgers win. Freddie Freeman and Cody Bellinger homered for the Dodgers.

The Dodgers are 15-4 when Gonsolin starts, and he has nine quality starts, although he has given up 12 runs on 18 hits and five walks in 16 innings. Before that, his ERA was a miniscule 1.62.

His lone start against the Padres this season came July 1 at Dodger Stadium. He allowed one run on four hits and no walks with eight strikeouts in 7 2/3 innings to earn the win. The lone run came on a Trent Grisham homer.

Machado didn't play that night. And Soto and Bell weren't yet Padres.

That will change on Friday.